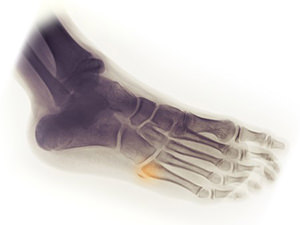 If you have suffered an avulsion foot fracture, contact us today at 888-804-5044 to speak with an avulsion injury lawyer and to learn your options.

What is a Foot Avulsion Fracture?

Avulsion fractures occur when a muscle contraction during a trauma results in a ligament or tendon tearing off a part of the bone creating a bone chip in the damaged area. A foot avulsion fracture is slightly different in that it occurs almost always with a ligament causing the bone chip and usually only occurs in the joints of the toes, or the metatarsal bones of your foot.

A foot avulsion fracture is also more consistent than most avulsion fractures because it has a more common recovery time and treatment. Typically, the fracture can be healed within 6 weeks with possible physical therapy and generally just one of a few different treatments. These common treatment options include keeping the weight off of the injury and wearing a walking boot. There are times, however, that the foot avulsion fracture can be more severe and may need an extensive amount of rest. Most times this type of injury can be treated non-operatively, but in some cases, surgery with multiple checkups throughout the course of a year may be necessary. This is why it is important to seek medical council as soon as an injury occurs to learn the best course of action for your injury.

Seeing a Doctor About Your Foot Avulsion Fracture 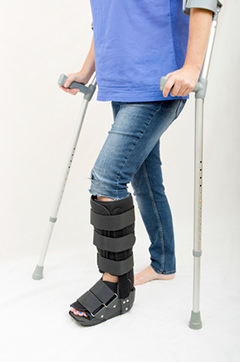 When visiting your doctor, it is important to accurately describe what you are feeling and ask as many questions as possible to get the quickest and best results for recovery. Signs of this trauma may include:

If you chose not to seek medical advice and treatment, you run the risk of exacerbating the foot avulsion fracture or having a longer recovery time. During your checkup, you can expect a physical exam and possibly having a radiologist take x-rays or an MRI.

How Much Is a Foot Avulsion Fracture Worth?

If you suffer a foot avulsion fracture due to negligence or carelessness from another party, it is important to understand all of your options to avoid monetary losses from current or future medical bills as well as possible wage losses. There have been many cases in the past involving foot avulsion fractures that have resulted in compensation.

Below are some examples of New York cases involving a knee avulsion fracture claim (often with other injuries), which resulted in compensation for the claimant. These cases have been handled by various law firms throughout the state and are provided for information only.

Even a “little” foot avulsion fracture is a significant injury, and should be taken seriously. Without proper treatment this fracture can turn into a more drastic problem and could result in future issues and monetary loss. If you have any questions or would like further assistance with your avulsion fracture case, call our avulsion injury attorneys today at 888-804-5044, and we will be happy to guide you in the right direction.